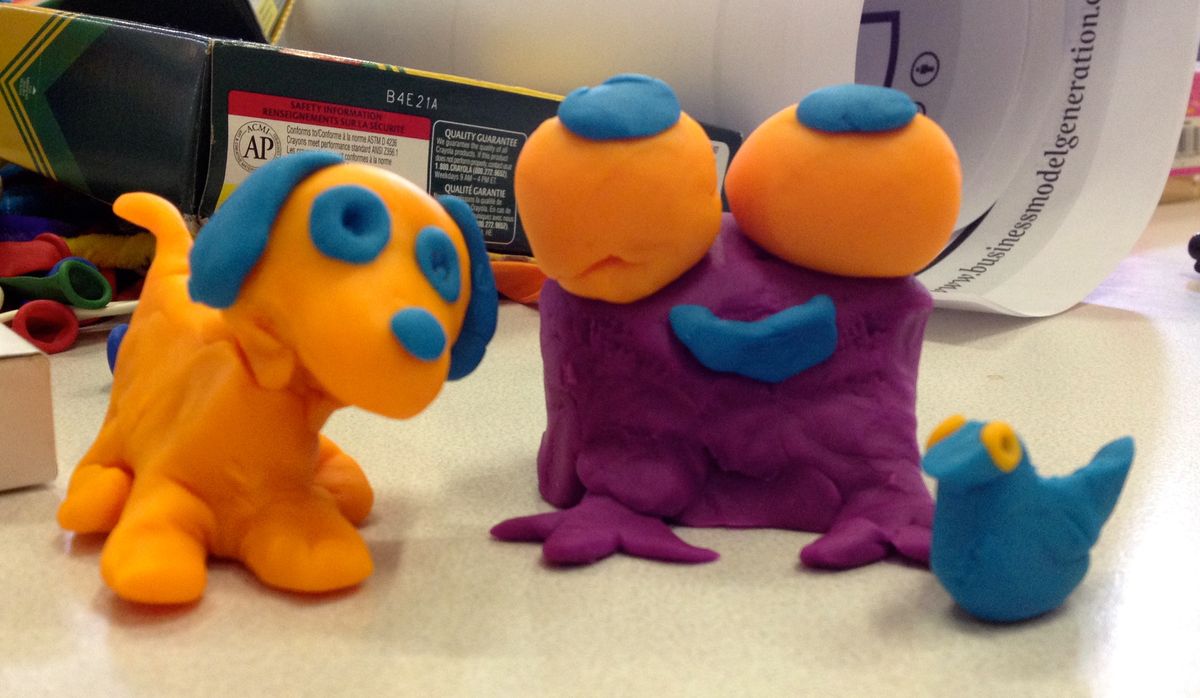 Creative muscle: Use it or lose it!

A couple of years ago, I sprained a muscle in my lower back quite badly – during my morning stretching routine. (The irony of this is not lost on me). As usual, I tried to wait it out, assuming I’d recover in a couple of days. But two days later, while putting on a sock, I felt two vertebrae slip noisily and sickeningly out of place – and knew I was in trouble. I decided to suck it up and go to physio. (I don’t have benefits – another joy of being self-employed, so have to be in dire straits to shell out for help.)

Jacquie, my physio, figured out quickly that the problem was weak core muscles. As an active, albeit recreational, athlete, I’ve always worked hard to stay in shape and was both mortified and frustrated to hear this. At one point, she had me lie on my stomach, bend my knee and try to fire one of the muscles in my butt to push my heel towards the ceiling. “Grrrunnntttarghugh”. Nothing doing. I simply could not engage that muscle. It was turned off. And, like many of my other core muscles, had been “off” for years. Why? The best guess is that, after blowing both ACL’s in my knees years earlier, I stopped bending my knees to do stuff – which got me using my back and hamstrings more – which got me out of using my core.

I had developed workarounds. Shortcuts that were easier on me. Ways of doing things that didn’t require me to engage my weaker muscles – didn’t require me to work or get out of my comfort zone. It took me 3 months of daily exercise just to be able to fire that muscle in my butt. Two years later, I still do a daily core workout and am just now starting to feel that I’ve turned the corner and have some structural stability and strength.

In the last six months, I’ve discovered that I face the same challenges with my creative muscles. If I’m on a project that requires more “rote” work, or repeats something I’ve done before, my creative muscles get slack. Before I know it, I’m developing shortcuts, doing things because they’re easy – not because they’ll generate the best results or the deepest impact. It’s less work to stay inside my comfort zone. That’s one of the reasons why I’ve started a new morning writing practice. It forces me to challenge myself 4 days a week. I have to sit down and do something new. I’ve found that, if I don’t keep my creative muscles working, it takes me days to get them moving when the time comes that I do need them.

Enjoying this post? Become a subscriber to the Q.west for good and get exclusive access to innovation stories and strategies that help you grow your influence and impact.
Sign me up!

We’re all under such pressure these days to deliver stuff, to work more and faster, that we rarely take the time to try new things. And it does take time – because quite often, new approaches don’t work. We fail. Which is awesome. Because that’s how we learn. If I try a new cake recipe and it collapses into a sticky heap, I try to figure out why and start again. (Yes, I will eat it anyway!)

Exercising our creative muscles daily is critical to keeping them strong, limber and ready for action. And you can work them out in a million ways. You just need to be intentional about it. Make the time and effort. Make up a new recipe from the ingredients in your fridge. Sketch your next memo as a cartoon, instead of writing it. Act out your next client pitch with a colleague as a rehearsal. Scrapbook an adventure road map for your up-coming vacation. Draw your ideas on a whiteboard during a meeting, instead of presenting a Powerpoint – and invite feedback. Start a daily Playdoh sculpture club in your lunch-room. Play imagination games with your kids.

By investing just a few minutes a day, you’ll not only strengthen your creative muscles – but you’ll also grow your tolerance for risk, ambiguity, failure and wicked problem-solving.

My TEDx talk about how stories can make you smarter is finally available online! As I reflect on what an incredible experience it was, I wanted to share a few lessons I learned for everyone who wants to be a better speaker. Note that I knew all these things going
As the new ED of the California Symphony, Aubrey Bergauer faced a brutal challenge - turn things around financially in less than two years, or major institutional supporters would pull their funding. She knew that tinkering with the music or marketing wouldn't fix things. So she decided to try something
A decade ago in Texas, 90% of defendants charged with capital offences were being executed under the death penalty. Most of them were Black. Then, a self-described "ragtag" legal team decided to try to change things. In just six years, they dropped that number from 90% to less than 1.